Alrighty, time to put your seatbelts on because we’re about to talk about something very serious… and scary. It’s a battle most of us have had to face… a battle that has had many of us on the run…a battle that has caused fear to grip us in the most real way.

I don’t know about you, but I’m NOT a fan of spiders; however, there was a lesson God taught me through one of these disgusting creatures that I want to share with you. It was a winter morning in Paris, Texas. I was in my bathroom wearing my robe and slippers brushing my teeth when my eye caught something hanging from the ceiling. The blood drained from my face as I realized… it was a black widow. 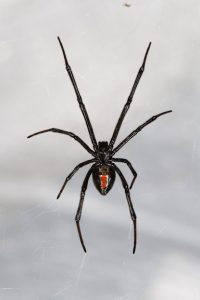 My life flashed before my eyes… well that’s a little dramatic, but I did panic. I took of my slipper, aimed, and threw it at the spider only to knock it down to the ground. (I may have also made some very awkward high-pitched sounds that we won’t discuss further)

Now before you take my man card away, let me remind you that black widow spiders are indeed dangerous. One bite from one of these can cause some serious damage to a human. It wasn’t wrong to have a healthy awareness of what it could do, but it was a little crazy to let something that small take control of my mind, or in this case, my bathroom. In fact, it’s almost comical that this little enemy could convince me that he’s got more power that I have.

But something happened when I spotted it on the ground. There was a boldness that filled me as I lifted my foot (with the slipper on of course) and stomped the little monster underneath. The battle was over. The fear was gone. The victory had been won!

Was the lesson about a spider? It was actually about a lot more. You see, sometimes we have things that seem to be hanging over our heads, causing us to fear. All kinds of situations that threaten our livelihood. They try to rule the room, strike fear, and take control of your mind and emotions. But something happens when we relocate these things from above us, to under the feet of Jesus!

Check out this prayer form the book of Ephesians

18 I pray that the eyes of your heart may be enlightened in order that you may know the hope to which he has called you, the riches of his glorious inheritance in his holy people, 19 and his incomparably great power for us who believe. That power is the same as the mighty strength 20 he exerted when he raised Christ from the dead and seated him at his right hand in the heavenly realms, 21 far above all rule and authority, power and dominion, and every name that is invoked, not only in the present age but also in the one to come. 22 And God placed all things under his feet and appointed him to be head over everything for the church, 23 which is his body, the fullness of him who fills everything in every way.

GOD PLACED ALL THINGS UNDER HIS FEET!

That includes whatever fearful situation you’re facing today. It’s been placed under the feet of Jesus. I don’t know about you, but that eases my mind and my heart. Jesus, who loves me, and who knows me, and who died for me is in control. And not only that, but through Him I have His incomparably great power to overcome the enemy!

Today I choose to focus on Him and what He has done. This doesn’t mean we don’t have situations that are serious and potentially harmful, but it means we face them from the standpoint of victory. I will tell every “spider” of a circumstance that the Lord is in control and I will fight my battles according to the word.

Today I challenge you to picture your “spider”, whatever it may be, under the feet of Jesus.