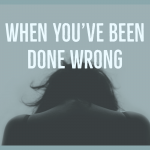 Do you not say, “I will repay evil”; wait for the Lord, and he will save you.

How easy it is to desire retaliation when we’ve been done wrong. Often, our instinct is to make the person suffer as we have. If someone speaks badly of us, we are tempted to speak badly of them. If someone hurts us in some way, we selfishly desire vengeance.

Proverbs 20:22 gives us a pride-breaking look into the heart of God. We know that vengeance is the Lord’s but we have new insight when we see the focus of this verse. He doesn’t put the focus on the one who has committed the evil, but rather he puts it back on us.

He says, “When evil is done to you don’t repay it with evil, but wait on the Lord WHO WILL SAVE YOU!“

We naturally want this to say, “Wait for the Lord who will make them pay for what they have done!” But God is showing concern for our response to others. Of course he will take care of his children and will respond to those who have mistreated us… yet with grace. God gives us a warning to guard our hearts by waiting on him to rescue us from not only evil, but from ourselves.

If you’ve been wounded, lied to, manipulated, attacked, or mistreated in any way, put your efforts into waiting on the Lord to save YOU. Don’t respond quickly. Don’t speak hurtful words out of anger. When pain breaks you and the enemy tries to push his way into your heart, resist him by trusting in the Lord. Don’t allow your heart to go into a dark place filled with punitive plans for someone else. He will take care of the problem… but His heart today is to take care of you! Wait for the Lord, and He will save you!

26 “In your anger do not sin”: Do not let the sun go down while you are still angry,27 and do not give the devil a foothold. 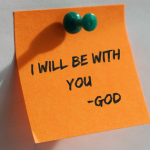 Joshua 1:5
No man shall be able to stand before you all the days of your life; as I was with Moses, I will be with you. I will not leave you nor forsake you.

It was God who did the mighty things with a stuttering man named Moses. It was ALWAYS GOD! The Lord took a man who was uncertain and insecure about the task and used him greatly. We can’t look down at Moses for his fear in the beginning, because the truth is, the task was bigger than him. But God was with him and it was accomplished!

Joshua knew the accomplishments and the power that was displayed under the leadership of Moses, and he knew he also had a great task that was bigger than he was. But the Lord quickly assures him that HE will be with him.

The truth is, all of our purposes are bigger than we are!

The challenges we’re meant to overcome are through the power and presence of God. So be assured today that this same God who did the impossible with regular people all throughout the Bible is here today to do the impossible with you. Your calling and assignment may look big… GOOD! Because this will remind you that God is BIGGER!
He’s with you today so be confident as you walk with Him into victory. 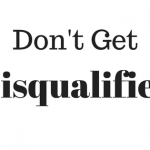 Saul undoubtedly felt the pressure of the battle. The enemy’s army was HUGE. Can you imagine the stress…trying to hold it all together as the leader of an army that is outnumbered. He became impatient and he took matters into his own hands, which wasn’t what God had instructed.
This act of disobedience would change his life. “Would have” is a key phrase here… if you Would Have been obedient, the Lord Would Have established your Kingdom over Israel forever.
Disobedience is no joke. It’s not something we can pick and choose depending on the situation. It’s sometimes very difficult in the face of pressing circumstances to trust God and His timing. But we can never do in our own strength what we can do in God’s strength. We can never accomplish in our own timing what God can accomplish in His.
Your situation may be pressing today, but remember that it doesn’t change what God has already spoken to you. His instructions and commands are to be followed. Don’t freak out and think you’ve been abandoned. Don’t think you’re gonna have to take the reins. Sometimes the hardest thing to do is to trust God in the waiting. Immediately after Saul just “did it himself”, Samuel showed up…
I encourage you (and myself) to place obedience to God as the first priority!

You can’t prove that you trust the Lord without an opportunity to trust Him.

This is your opportunity! What are you going to do? 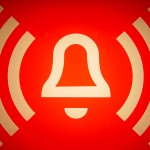 20 After this, the Moabites and Ammonites with some of the Meunites[a] came to wage war against Jehoshaphat. 2 Some people came and told Jehoshaphat, “A vast army is coming against you from Edom,[b] from the other side of the Dead Sea. It is already in Hazezon Tamar” (that is, En Gedi). 3 Alarmed, Jehoshaphat resolved to inquire of the Lord, and he proclaimed a fast for all Judah. The people of Judah came together to seek help from the Lord; indeed, they came from every town in Judah to seek him.

5 Then Jehoshaphat stood up in the assembly of Judah and Jerusalem at the temple of the Lord in the front of the new courtyard 6 and said:

“Lord, the God of our ancestors, are you not the God who is in heaven? You rule over all the kingdoms of the nations. Power and might are in your hand, and no one can withstand you. 7 Our God, did you not drive out the inhabitants of this land before your people Israel and give it forever to the descendants of Abraham your friend? 8 They have lived in it and have built in it a sanctuary for your Name, saying, 9 ‘If calamity comes upon us, whether the sword of judgment, or plague or famine, we will stand in your presence before this temple that bears your Name and will cry out to you in our distress, and you will hear us and save us.’10 “But now here are men from Ammon, Moab and Mount Seir, whose territory you would not allow Israel to invade when they came from Egypt; so they turned away from them and did not destroy them. 11 See how they are repaying us by coming to drive us out of the possession you gave us as an inheritance. 12 Our God, will you not judge them? For we have no power to face this vast army that is attacking us. We do not know what to do, but our eyes are on you.”

Back when I was in school (which seems like ages ago), we would have fire and tornado drills. Do you remember those? So it works like this… an alarm will sound, which prompts us to execute the plan in place. The alarm’s purpose is to bring us to a state of alarm. Now without the plan in place, the alarm will just ensue chaos!

Not only that, but he also had a plan in place. The previous generations had already decided what to do in the state of emergency.

9 ‘If calamity comes upon us, whether the sword of judgment, or plague or famine, we will stand in your presence before this temple that bears your Name and will cry out to you in our distress, and you will hear us and save us.’ (emphasis added)

What a plan! He later states that the enemy coming is too strong for them, and that they don’t know what to do; however their eyes are on the Lord.

There are some important keys to victory in this passage.

The response of the people brought a response from God! He pretty much said, “I GOT THIS”. The battle is not yours, it’s God’s. He told them they wouldn’t even have to fight it. WOW! He told them to still get ready and to show up to face the enemy so they could see the deliverance of the Lord.

16 Tomorrow march down against them. They will be climbing up by the Pass of Ziz, and you will find them at the end of the gorge in the Desert of Jeruel. 17 You will not have to fight this battle. Take up your positions; stand firm and see the deliverance the Lord will give you, Judah and Jerusalem. Do not be afraid; do not be discouraged. Go out to face them tomorrow, and the Lord will be with you.’”

Have you ever heard the saying “Pick and choose your battles”? If your married, I’m sure you’ve discovered this concept, and it’s a good one to know. We can definitely do this in a lot of situations. We may let little Susie wear that Cinderella dress to school because we aren’t choosing that battle. We may hold our tongue a few times a day to avoid a conflict a home that isn’t worth the fight. But when it comes to spiritual battles, the luxury of picking and choosing doesn’t seem as available. Still, there are times we fight battles we were never intended to fight. Things come our way that we would never choose and that we could never win without our great God. Yet many times we find ourselves worn out and defeated because our eyes are on the battle and we haven’t taken it to the Lord in fasting and prayer. Inner chaos becomes outer chaos when we are unprepared and try to attack in our own abilities. We’re no match on our own! But God hears the cry of his children and He is the ever-present help in the time of trouble. Yes there are battles we must fight in which He provides the power, but there are also battles He fights for us where we’re reminded that He is the Almighty Deliverer.

I was recently in a church service when a woman gave me a word that we never really want to hear. She told me I was about to be in a battle. I thought to myself, I live in a battle lady! But in my spirit I was immediately quickened to fast and to pray. Over the next several days, there was a firestorm all around me and yet it never touched me. It was as if God was putting the fires out before they ever reached my door. He was fighting for me.

Know today that God is the God of victory and that He cares for you. An attack on you is an attack on His child, which makes the battle His battle. I encourage you to make a plan. What are you going to do when the alarm sounds in your life? Practice it! Practice focusing on the Lord in the little things, and commit to fasting and prayer on a more regular basis. Remember one day there’s another “alarm” that’s gonna blast from a heavenly trumpet, and God’s got a plan for that one too!