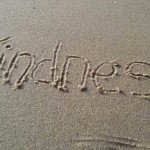 Genesis 39:21
But the LORD was with Joseph and extended kindness to him, and gave him favor in the sight of the chief jailer.

This verse really stood out to me today as I listened to the story of Joseph. Here’s a man who has been through it! He’s already been thrown into a well, then sold into slavery by his brothers who led their dad to believe that he was killed. He’s gone from being a favorite son to a slave, and now after being falsely accused of a crime he didn’t commit, he’s thrown into jail. Yet in the midst of this, as he’s in jail, the bible says that the LORD was with Joseph and extended kindness to him.

This hit me hard. My human mind wants to think that God’s kindness means no trouble. I imagine that His kindness would prevent things like this from happening in life. If God was showing kindness to him, why wasn’t he found not guilty and this woman been busted?

Kindness doesn’t mean there are no wrinkles in the road of life. Jesus even said himself that in this world we will have trouble. We also know that God’s thoughts are not our thoughts and that his ways are not our ways. How could Joseph have known that this would all work together to bring about his destiny? Kindness isn’t lack of conflict. It’s grace to get through it.

How much better would life be if we would recognize that His kindness is in effect right now, in this very moment of life. One of my favorite verses of scripture is found in Lamentations 3:21-22. It says, “This I recall to my mind and therefore I have hope, the LORD’S loving kindnesses indeed never cease, for his compassions never fail. They are new every morning; Great is your faithfulness.”

This story of Joseph is proof that just because we find ourselves in difficult and painful places, doesn’t mean that we’re in the wrong place. It doesn’t mean that we’ve lost the favor of God or that he’s deserted us. The LORD was always with Joseph and gave him favor in places he never dreamed of going… bad places and amazing places. It’s so much easier to focus on God’s favor in the situation rather than the place Joseph was at when we read it on a page, but in the thick of our lives, we find it quite the opposite. We focus on where we’re at rather than the kindness God’s extending to us, giving grace to see us through.

I challenge you shift your focus from what’s happened and where it’s brought you, to the kindness of God today. Remember that all things work together for the good of those who love the Lord and are called according to His purpose. Then remind yourself that you are called according to His glorious purpose! Resolve to commit your work to Him, and watch his favor unlock the doors and lead you into your destiny.