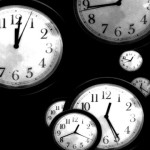 2 A Message from God-of-the-Angel-Armies: “The people procrastinate. They say this isn’t the right time to rebuild my Temple, the Temple of God.”

3-4 Shortly after that, God said more and Haggai spoke it: “How is it that it’s the ‘right time’ for you to live in your fine new homes while the Home, God’s Temple, is in ruins?”

5-6 And then a little later, God-of-the-Angel-Armies spoke out again:

“Take a good, hard look at your life.

You have spent a lot of money,

but you haven’t much to show for it.

You keep filling your plates,

but you never get filled up.

You put on layer after layer of clothes,

but you can’t get warm.

And the people who work for you,

what are they getting out of it?

a leaky, rusted-out bucket, that’s what.

“Take a good, hard look at your life.

“Here’s what I want you to do:

Climb into the hills and cut some timber.

Bring it down and rebuild the Temple.

Do it just for me. Honor me.

You’ve had great ambitions for yourselves,

but nothing has come of it.

The little you have brought to my Temple

I’ve blown away—there was nothing to it.

The message in this chapter hit me like a ton of bricks. The people have made time to work on everything for themselves but left the things of God in ruins. It wasn’t time for that yet, they said. It wasn’t time to make God’s temple beautiful. Instead, by their deeds, they declared it was time for them to get their own homes, and businesses, and personal lives all perfect. Their investments of energy, money, and time were spent completely on themselves. When God spoke to Haggai, He asked how it could be that it’s the ‘right time’ for you (God’s people) to live in your fine new homes while the Home, God’s Temple, is in ruins.

Then He asks the people to do something… Before He commissions them to begin working on the Temple, He asks them to really think about the outcomes of their choices. To really look at their priorities and their efforts compared to the rewards. They didn’t add up. They were working hard for little harvest. They were spending a lot with little to show for it. They were eating and drinking but never full. They were bundling up but never warm. Where was everything going? Why was the effort so much greater than the return? Has it not crossed your mind yet that this isn’t working out well? Yes you’re living in your nice home that you’ve built… but nothing is blessed.

Then God states the reason…

9-11 “And why?” (This is a Message from God-of-the-Angel-Armies, remember.) “Because while you’ve run around, caught up with taking care of your own houses, my Home is in ruins. That’s why. Because of your stinginess. (The Message Bible)

The NASB puts it this way…

7 Thus says the Lord of hosts, “[e]Consider your ways! 8 Go up to the [f]mountains, bring wood and rebuild the [g]temple, that I may be pleased with it and be glorified,” says the Lord. 9 “You look for much, but behold, it comes to little; when you bring it home, I blow it away. Why?” declares the Lord of hosts, “Because of My house which lies desolate, while each of you runs to his own house. 10 Therefore, because of you the sky has withheld [h]its dew and the earth has withheld its produce. 11 I called for a drought on the land, on the mountains, on the grain, on the new wine, on the oil, on what the ground produces, on men, on cattle, and on all the labor of [i]your hands.”

God gives us two purposes for the temple in this verse. To please Him and to glorify Him. It wasn’t right for the people to care first about supplying for themselves and making themselves comfortable. If it’s not time to make God’s temple beautiful now, then when will it be time? The answer is NEVER, IF you keep doing what you’re doing. You’ll always need more. You’ll never be satisfied. You’ll never be warm. You’re money will always be in a bag with holes. You’re time will always be spend trying to make things work for yourself.

God knew that the only way to stop this madness was to get them to take a hard long look at their lives. Look at the lack. Look at how the ground isn’t giving up a big harvest. Look at how the sky has withheld the rains. Look at the drought on everything. All the things you rely on require things that God controls. He controls the rain. He controls the increase. Without Him in the picture, would be like trying to type a paper without the computer plugged in. It’s toil in vain. Then He told them to get to work on the temple. Make it the priority. When they obeyed, the word says that God stirred up the spirit in them.

Many things have changed since the Old Testament. The temple is no longer a building, but a body. You’re body is a temple of the Holy Spirit and God is still calling us to work on the temple. It should still be the priority. And yet, just like the people in the days of Haggai the prophet, we make time for everything else. People say it’s not time for the things of God. We work hard to live in nice houses and to be successful. We make sure we’re at work everyday but can’t make it to church. We get all wound up if we are late to lunch and yet our souls are starving for spiritual food. The temple lies in ruins. We bring everything into it that pleases us, and yet what about what pleases HIM? We drink from all types of places and things to satisfy our thirst. We add layer over layer of things to make us comfortable and warm inside but still feel the chill. We can name the starting line up for our favorite sports team and yet can’t memorize a few scriptures. We spend and spend but what do we really have to show for it at the end of the day? We’ve left something out. Something has got to change.

God desires for your temple to do the same two things He desired in the old testament… To bring Him pleasure and to glorify Him.

19 Or do you not know that your body is a [a]temple of the Holy Spirit who is in you, whom you have from [b]God, and that you are not your own? 20 For you have been bought with a price: therefore glorify God in your body.

Is that a picture of your life? Is that a description of your temple? Are you glorifying God with your body and your life? Are you pleasing Him? Have you made time for everything else? It’s time! He’s asking you today to take a long and hard look at your life… have your personal interest taken precedence over the things of God? He’s asking you today to make Him number 1. His temple, where He dwells and moves and speaks, should be one of the most splendid things in your life. Consider it well and watch God stir up the spirit within you as you begin honoring Him with the temple.